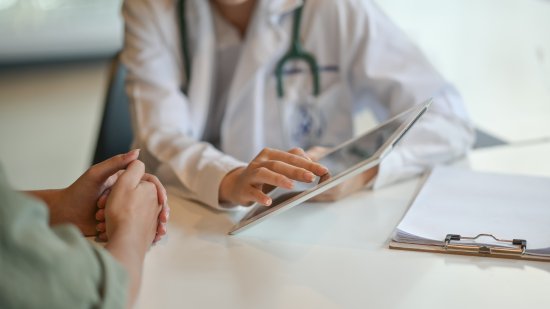 Our client, SG, attended her GP in December 2015 complaining of urinary symptoms including leaking when she laughed or coughed. Her GP advised her to do pelvic floor exercises, and he referred her to the hospital to see a urogynaecological specialist.

SG attended for urodynamic studies on 27 May 2016 and these showed detrusor overactivity and urgency but importantly, did not show urodynamic stress incontinence. She was advised to start a prescription of Vesicare 5 mg to be increased to 10 mg later on for the next three months.

In November 2016 underwent uroflowmetry which indicated a good detrusor muscle function. However it was noted that Vesicare had given her little benefit in relation to her overactive bladder.

The urogynaecologist advised SG that there were two options for the treatment of her incontinence; either tension free vaginal tape (TVT) surgery or autologous fascial sling. He informed SG that TVT had a very high success rate and that this was the best option for her. He informed SG that it was a straightforward procedure to be carried out under a general anaesthetic as a day case. SG signed a consent form on that day which described this procedure as “to treat SI” [stress incontinence].

SG underwent the TVT procedure at Eastbourne District General Hospital on 22 March 2017. On coming round from surgery, SG found that she could not move her left leg. She initially thought this was due to the anaesthetic. SG became worried however when things did not improve and the Consultant came to review her. He was unable to diagnose the precise cause, and SG was therefore admitted to a urology ward.

On the urology ward a size 12 catheter was inserted and SG was noted to void 800ml with a residual bladder volume of 400mls. There was no improvement in her left leg power or function. SG was advised to mobilise and was referred to physiotherapy. Over the following days she did regain some power in the left limb but remained unable to bend her knee or hip. She was injected with 300mg of hydrocortisone to ease the inflammation of the nerve in her leg.

SG underwent a diagnostic MRI scan of her pelvis on 27 March 2017. Excessive oedema within the adductor muscle compartment was noted. There was no evidence of a recent hip dislocation and degeneration in the lower spine was observed. A review by a radiologist with a sub-speciality interest for further detail was suggested.

On 28 March 2017 the TVT tape insertion was removed and a cystoscopy was performed and a retropubic TVT inserted at the same time. This was performed by the same surgeon as previously, who noted following the removal of the TVT that SG had made a complete recovery. However, this was not the case.

In April 2017 SG  was still having pain in her left leg, which started at her hip and radiated down her leg. SG was therefore referred to a neurologist, and thereafter to the pain clinic as well.

SG was seen by the neurologist on 2 May 2017 who noted “following the revision she managed to walk and improved from the motor perspective but she has been left with residual tingling and numbness of the left thigh resembling meralgia paraethetica”. The neurologist thought that the diagnosis was possibly neuropraxia, which he hoped would resolve with time. However, he referred SG on for nerve conduction studies/EMG.

In May 2017 SG was referred for physiotherapy because she was still suffering from severe pain in her left leg.

SG underwent a number of investigations in 2017 which included an MRI scan, which showed degenerative changes at L5-S1 with loss of disc height at L5-S1 with end plate degenerative change. There was a broad based disc bulge at this level with bilateral recess narrowing and narrowing of the exit foramina. However, there was no definite evidence of nerve root compression and there was no significant spinal canal stenosis.

Between 7th September 2017 and 1st March 2018 SG attended pain management and physiotherapy and underwent hydrotherapy. However, this did not relieve her symptoms. She continued to suffer constant severe pain down her left leg with the sensation of sandpaper rubbing her skin below the left knee.

In April 2018 SG’s hip and thigh pain was such that she was unable to work for one week or to drive. On 25th April 2018, whilst standing in the kitchen, SG felt urine gushing down her legs this being the second occasion on which this had occurred in the past month. Her incontinence was ongoing and she suffered leaks and urgency on a daily basis. The pain would interrupt her sleep such that she became chronically tired and this, together with her incontinence, impaired her mood, her capacity for work and her family life.

Supportive expert evidence was obtained from a Consultant Urogynaecologist (on breach of duty and causation) and a leading neurologist (on causation). The experts were of the opinion that SG’s symptoms were incorrectly diagnosed as stress urinary incontinence, rather than detrusor over activity, and that therefore SG had been incorrectly advised to undergo TVT surgery. The correct treatment in SG’s case would in fact have been medication, weight loss and/or Botox, notwithstanding her lack of response to Vesicare medication previously.

Further, the medical experts instructed by Osbornes were of the view that the performance of the surgery on 22nd March 2017 was substandard in that SG was positioned with such force in the lithotomy position and/or operated on in such a manner as to cause a permanent nerve injury to the left L3/4 nerve roots as they come away from the spinal cord.

Expert evidence was obtained commenting on causation and this enabled SG to argue that had she been treated correctly with medication for her overactive bladder, it is likely that she would have then been offered Botox treatment at 3-6 monthly intervals. It was therefore more likely than not that her overactive bladder would have been brought under control and she would have been continent of urine. Naturally, she also would have avoided the initial surgery and the revision surgery which took place in March 2017.

A Letter of Claim was sent to the Defendant Trust in May 2019, however liability was denied. The Defendant maintained that SG had been correctly diagnosed and that surgery was the appropriate option, but that she had simply suffered a recognised complication of such surgery.

The parties were unable to reach any agreement and so in March 2020 court proceedings were issued against the Defendant hospital trust. A barrister, Laura Begley of 9 Gough Chambers, was instructed to advise SG.

The court proceedings were served against the Defendant, together with Condition and Prognosis evidence which had been obtained from a Consultant Urogynaecologist and a Consultant Neurologist, however the Defendant maintained their denial of liability, serving a complete Defence to the claim in April 2021 (various extensions of time had to be agreed due to the SARS-COV-2 pandemic).

SG’s case was then listed for a Costs and Case Management Conference, however shortly before this was due to take place, and following a period of negotiation, the parties agreed a five figure settlement of SG’s case.

The settlement will enable SG to access continued care with a specialist in urogynaecology. To treat her urinary urgency and urge incontinence, SG can now obtain a trial of anticholinergic therapy in conjunction with bladder training from a specialist continence nurse. She will also be able to access supervised pelvic floor therapy.

In relation to the ongoing pain in her left leg, the settlement will enable SG to undergo multidisciplinary pain management treatment. The medical management will include physical treatment, injection treatment, talking therapies and pharmacological therapies, all supervised by a Consultant Neurologist.

“This was a very difficult claim in which complex issues relating to breach of duty and causation remained in dispute throughout. However, with the help of quality expert evidence from some of the country’s leading medical practitioners, I am very pleased that we were able to obtain a positive result for SG, who is now able to move on with her life and access the treatment that she requires”.

To speak to a clinical negligence specialist about your case, please call Nicholas Leahy, or complete an online enquiry form.

Insights from Nicholas VIEW ALL