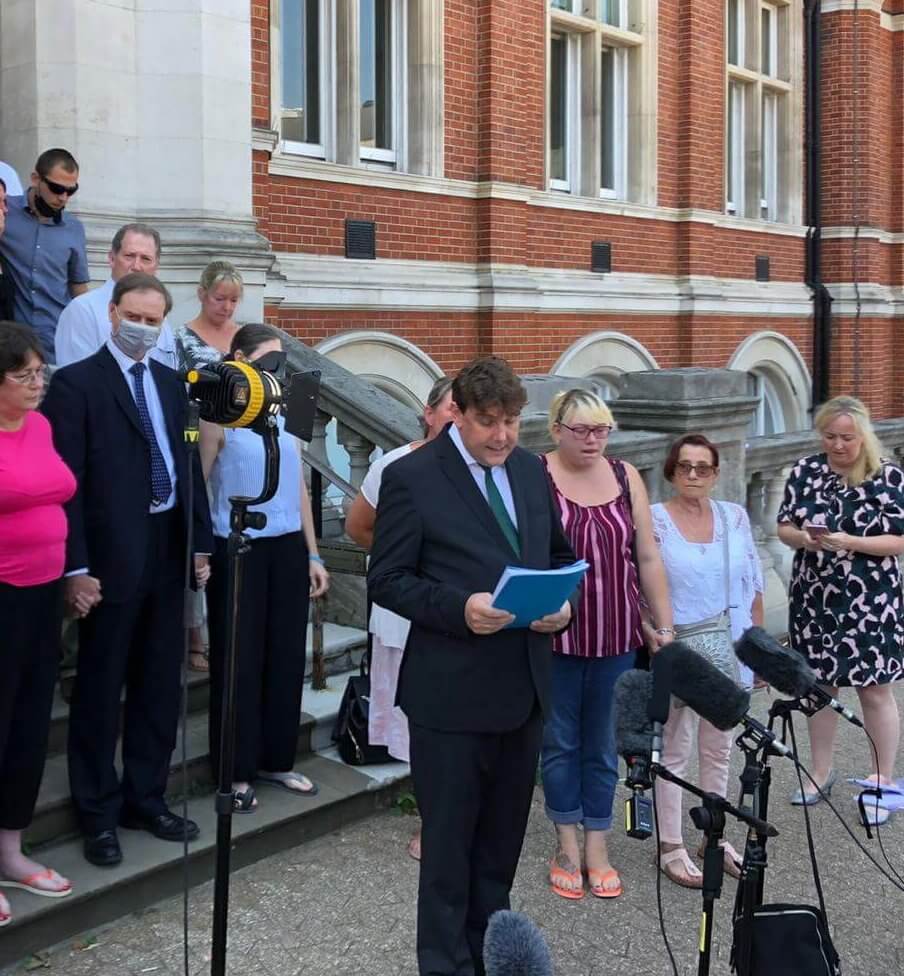 The families of victims killed in the Croydon tram crash today welcomed a coroner’s recommendations to prevent another tragedy.

Senior Coroner Sarah Ormonde-Walsh, who presided over the inquest into the seven people who died when a tram turned over on 9 November 2016, has recommended four actions in a prevention of future deaths report.

The coroner said automatic braking systems should be installed on trams and doors should be strengthened. She added all tram operators should sign up to an anonymous reporting scheme to allow whistle-blowers to report incidents and that a national tram safety passenger group is set up.

Dane Chinnery, 19, Philip Logan, 52, Philip Seary, 57, Dorota Rynkiewicz, 35, and Robert Huxley, 63, all from New Addington, and Mark Smith, 35, and Donald Collett, 62, from Croydon died when a tram overturned at Sandilands Junction, while 62 of the 70 on board were injured, 19 seriously.

An inquest earlier this year concluded that all seven died as a result of an accident.

Jean Smith, 64, mother of Mark Smith who died after he was ejected through a door of the tram, said: “I am pleased the coroner has adopted most of the changes that the families campaigned for, in particular the recommendation that relates to strengthening doors. As the coroner points out, it was recommended that doors were strengthened after the crash five years ago and nothing has been done about it. It is outrageous that people travelling in trams could suffer the same terrible death that Mark did as they simply haven’t strengthened the doors.

“While the coroner’s recommendations are welcome, I am still angry and upset that nobody has been held accountable for what happened to my son and everybody else on that tram. It hurts more than words can say. It is also wrong and frustrating that we were not able to hear any evidence at the inquest from those responsible. We will now look to the Office of Rail and Road to see if they will prosecute.”

He said: “These recommendations are very welcome and if properly implemented, along with the 15 recommendations of the Rail Accident Investigation Board, they will go some way towards ensuring nobody else will lose their lives in the same horrific way as those who died in the Croydon tram crash. While nothing will bring their loved ones back, the families have always wanted to ensure that no other families in Croydon or the country suffer the same loss of loved ones on tramways.

“The families will now meet Baroness Vere, the minister with responsibility for light rail, to press her to ensure that all these recommendations are implemented.

“I would like to thank Croydon Central MP Sarah Jones for securing a debate in the House of Commons this week on the tram crash. During that debate Parliamentary under secretary for transport Trudy Harrison said she would look further into the legal loophole whereby driving causing fatalities on the part of bus drivers can lead to prosecutions that are only available in relation to tram drivers when they are on a road, but not on sections of track off the public highway. It is also to be welcomed that the government will agree to open a dialogue with the families. They will be continuing to campaign for a change in the way inquests into public transport mass fatality events are conducted, after the coroner ruled that the jury at the Croydon tram crash inquest could not hear oral evidence from any of the people directly responsible for the tragedy.”

Story can also be read in BBC news article

If you would like to speak to a serious injury lawyer, please call us, or complete an online enquiry form.