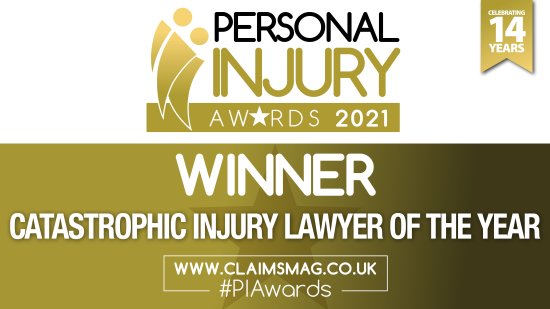 Osbornes Law are delighted to announce that Ben Posford has been named as ‘Catastrophic Injury Lawyer of the Year’ at The Personal Injury Awards 2021.

The awards, which took place on Tuesday 23rd November 2021 brought together hundreds of personal injury lawyers and other professionals to recognise the important work being done in this sector on behalf of often extremely vulnerable clients.

The judging panel said of Ben:

“The Catastrophic Injury Lawyer of the Year expertly undertakes a large breadth of cases, including some with a very high profile, and possesses a deep knowledge of quantum issues that the judges find impressive. They also come highly recommended and praised.”

As lead solicitor for most of the families of the Croydon tram crash, Ben was a constant figure at the recent inquest into the crash and continues to support the families as they campaign for safety changes to the tram network.

Ben is head of the catastrophic injury at Osbornes Law and has particular expertise in severe brain injury & spinal cord injury claims and is also a leading fatal accident practitioner. He is also known for his niche practice involving cauda equina syndrome claims and is one of only a few lawyers listed in band one of Chambers UK for his personal injury practice in London.

Ben is an accredited Fellow of the Association of Personal Injury Lawyers (APIL) and is also an advanced APIL accredited specialist in both Brain Injuries and Fatalities.