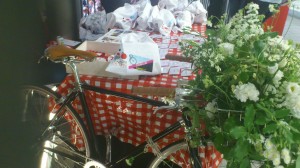 On Wednesday 16th July 2014 over 200 people from the ‘cycling world’ gathered at St Martin in the Fields for the London Cycling Campaigns’ ‘London cycling awards 2014’.

The award ceremony, at which Osbornes was the main sponsor rewarded individuals and brands from across from across the cycling sector for their contribution to cycling over the past 12 months.

“The London Cycling Campaign is key to ensuring that our roads continue to reflect the increasingly high number of cyclists who use and commute on them on a daily basis. The work that the LCC do in highlighting the dangers to cyclists from particular road layouts and submitting alternative designs to make roads and junctions safer for cyclists is crucial to saving lives and turning London into a safer city for cyclists. The London cycling awards celebrates and rewards those who continue to champion safer cycling whilst at the same time are in part responsible for opening up the benefits of cycling to a wider audience. Osbornes is extremely happy to support such efforts and play a small part in helping the LCC achieve its goals”.

The awards was hosted by award-winning journalist and keen cyclist Jeremey Vine.

Cycling brand of the year
Look mum no hands

Bike blog of the year
Road.cc

For more information about the awards, to find out about Osbornes own cycling initiatives or if you have been injured in a cycling accident contact Stuart Kightley by calling us or filling our online enquiry form.